is the common pattern of weather that occurs in an area. Specifically, climate includes the temperature, humidity, and precipitation that characterize a specific area over a consistent period. What contributes to the Earth’s climate? The sun is perhaps the biggest contributor to climate characterization, but the oceans, ocean currents, and elevation also contribute to each unique climate.

Remember, approximately 97% of the water on this planet is found in the oceans, which gives the world ocean a big capacity to moderate the earth’s climate. Look at the picture of the ocean surface temperatures. In what areas is the ocean water warmer? In what areas is it colder? Why? What is the average temperature of the ocean? The oceans contribute to the climate by absorbing or giving off heat. Which areas of the world ocean hold the most heat? It is thought that the first couple of meters of the ocean can store as much heat as the entire atmosphere! 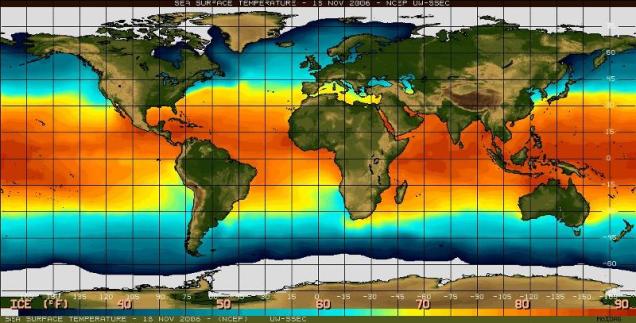 As indicated in the picture, latitude affects the temperature of ocean water. Just as there are different temperature zones on the earth, there is similar variation in the temperature of the world ocean. Because of the Earth’s tilt and changes in latitude, the Earth is heated unevenly by the sun. In some areas such as the tropics, the ocean water is much warmer because there is more solar energy distributed to a smaller area. These areas can be as warm as 36oC. Whereas polar areas receive little solar warmth as it is spread over a greater area and the surface waters are nearly as cold as the water at greater depths. During the middle of winter, some polar regions may receive no sunlight at all. The polar seas can be as cold as -2oC. Overall, the average temperature of the ocean surface water is about 17oC.

is a zone in which the ocean temperature changes rapidly with depth. The thermocline marks the boundary between the surface waters and the deeper layers of water that remain unmixed. This boundary usually begins around 100-400 meters and extends several meters downward. 90% of the total volume of the ocean is found below the thermocline. The temperature of this deep water is between 0-3oC.

As the wind and ocean currents move the water, the heat stored in the ocean moves throughout all parts of the world. As warm water from the equator flows toward the cooler latitudes, they warm the land regions they pass. Conversely, when cooler water flows toward the equatorial latitudes, they cool the air and the nearby land. This causes many coastal regions to be warmer in the winter and cooler in the summer than inland areas. This is just one way in which the oceans contribute to the climates of the world.

The ocean also contributes to the world climate by influencing the water found in the atmosphere. The oceans are the source of the majority of the water vapor that falls as rain or snow. Also, winds blowing from the sea often contain more moisture and contribute to a wetter climate at coastal areas. The ocean and the atmosphere are intricately integrated to create climate and weather; as one changes, all other factors are altered. For instance, if the weather changes and the temperature drops, clouds form, blocking the sunlight from warming the ocean, which in turn causes a change in the ocean current.