Phytoplankton are single-celled microscopic plants that float (e.g., diatoms) or swim weakly (e.g., dinoflagellates). “Phytos” grow when they get enough nutrients, carbon and light. Because carbon is readily available in the ocean as carbon dioxide, the usual “limiting” factors for phyto growth are light and nutrients.

Imagine winter conditions: phytos are suspended in a cold, wind-blown ocean. This well-mixed system has a lot of “stirred up” nutrients. But is there enough sunlight for growth? Can diatoms avoid being mixed below the sunlit zone? What about “dinos”? And did you know that low temperatures can slow phyto growth?

Spring brings increased sunlight and calmer winds that stir the nutrient-rich waters. Cool ocean temperatures favor phyto growth over that of their zooplankton grazers. This is a “window of opportunity” for reproduction of fast-growers: “weed species” such as chain diatoms and Phaeocystis.

The traditional view is that phytos cannot grow until ocean mixing decreases and layering begins, after formation of the thermocline (see Spring diagram at left).

As spring becomes summer, sunlight is readily available for phyto growth but nutrients are scarce in the upper ocean. The community shifts from fast-growing diatoms to slow-growing “recyclers,” including dinoflagellates (e.g.,Ceratium) and ciliates such as Laboea.

Summer conditions differ from spring in terms of availability of nutrients above the thermocline. Is this necessarily true for stations that are close to land? (Check biology data for Station 1 and Station 2).

During autumn, decreased sunlight and increased cooling at the surface increase the density at the sea surface; this favors sinking of upper waters. Autumn storms can increase mixing, as well (find out for yourself by clicking here). Eventually the thermocline breaks downs and favors wind-stirring of nutrients toward the surface.

In general, species such as chain diatoms predominate in early colonization of a habitat. With their high reproductive rates, these “weed species” can quickly take over a disturbed system.

On the other hand, some species — including many dinoflagellates — prevail as more and more species attempt to colonize a habitat. They have slower growth and reproductive rates, long life spans, but can outcompete other species in late, mature stages of succession. 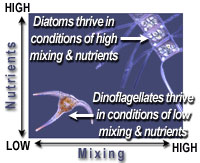 Think of the wintertime cooling and mixing as the “disturbed” system that gets colonized as the water stratifies in spring. After nutrients are depleted, the mature stages of succession occur with lots of nutrient recycling. This view of the relationship between physical conditions and phytos is shown just above.

According to our Gulf of Maine data, do certain types of phytos thrive better under layered conditions? How about mixed conditions? Does species diversity of change seasonally?