As previously discussed, the cell membrane, or plasma membrane, is made of a selectively permeable phospholipid bilayer that allows food, waste and cell products to enter or leave the cell easily. Review the diagram below to learn more. 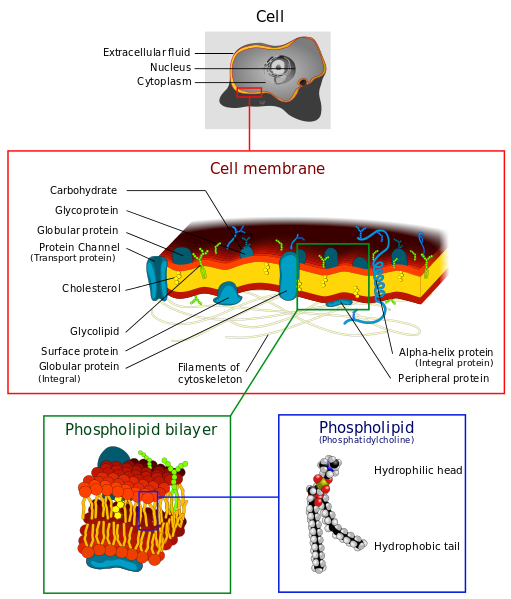 Ribosomes are complex structures of ribosomal RNA responsible for protein synthesis. Unlike the other organelles found in eukaryotic cells, ribosomes are not membrane bound. Instead, ribosomes consist of two subunits, and act as an assembly line where RNA from the nucleus is used to synthesise proteins from amino acids. Ribosomes may be free floating in the cytosol or bound to the outside of the endoplasmic reticulum or nuclear envelope.

Mitochondria are self-replicating organelles that occur in various numbers, shapes, and sizes in the cytoplasm of all eukaryotic cells. Mitochondria are a relatively large double membrane organelles that convert stored energy into chemical energy. This energy is generated by oxidative phosphorylation, a function of cellular respiration that makes ATP.

Chloroplasts are organelles which contain the green pigment chlorophyll which is critical to absorb solar energy from sunlight to synthesize carbohydrates in the process of photosynthesis. Similar to mitochondria, chloroplasts also have a double membrane. Both chloroplasts and mitochondira contain small amounts of DNA, which is evidence supporting the theory of endosymbiosis. Review the following video to increase your understanding of this important evolutionary theory.

Peroxisomes are specialized single membrane organelles that contain a core of enzymes used to assist in metabolism. The enzymes found in peroxisomes transfer hydrogens from various substrates to oxygen and often produce hydrogen peroxide as a by product.

For the purposes of remembering organelles and their respective function, it may appear easier to study them separately. However, in order to understand how organelles work together, think about the functions needed by the cell that may involve more than one organelle. For example, the endomembrane system of the cell is a system of membranes that connect organelles in structure and function. The endoplasmic reticulum, golgi apparatus, lysosomes, and vacuoles are connected in this system either through direct contact or by the transfer of membrane segments.