What is an Ecosystem?

An ecosystem includes all the organisms and the nonliving environment found in a particular place. The scale of ecosystems can change based on your perspective. For example you may choose to study your back yard, Chattahoochee National Forest, Lake Lanier or a wild life refuge and each is considered an ecosystem. Ecosystems are very complex. They can contain hundreds or even thousands of interacting species.

Watch the following clip from NOVA titled, “Energy Flow in the Coral Reef” to get a feel for the complexity of interactions in a Coral Reef Ecosystem. Use the questions below as a guide during the video.

Energy Flow in an Ecosystem

One of the ways that ecosystems are organized is based on the flow of energy from the abiotic to biotic parts of the ecosystem.

The two main sources of energy for life on earth are: 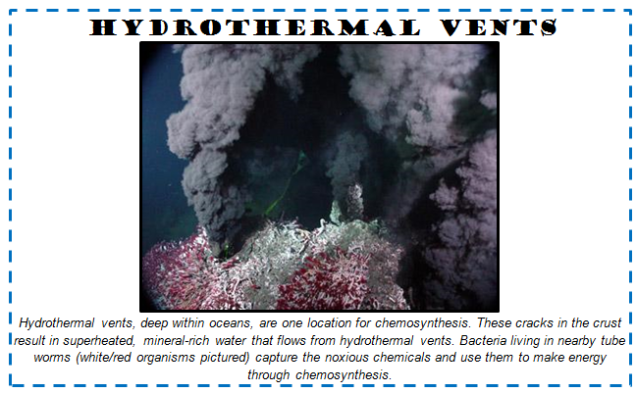 We already learned in an earlier module that there are two main ways to classify organisms: autotrophs and heterotrophs. Take a look at the more specific language we can use when speaking about each:

1. Autotrophs, or producers – convert energy into food that can be consumed.

a. Photoautotrophs get their energy from the sun and convert it into sugars that can be consumed for energy; includes plants and algae

b. Chemoautotrophs are organisms that get their energy by consuming inorganic molecules

2. Heterotrophs, or consumers – obtain nutrients from food that they take into their bodies. There are a few different types

b. Carnivores feed on herbivores or other carnivores. Examples include lions, sharks, eagles, and owls.

d. Decomposers get energy by breaking down dead organisms’ structures. Examples include bacteria, protists and fungi.

Organisms within an ecosystem are further classified based on their use of this energy into trophic levels.  A trophic level is an organism’s position in receiving energy from the initial source, or its “feeding level”: 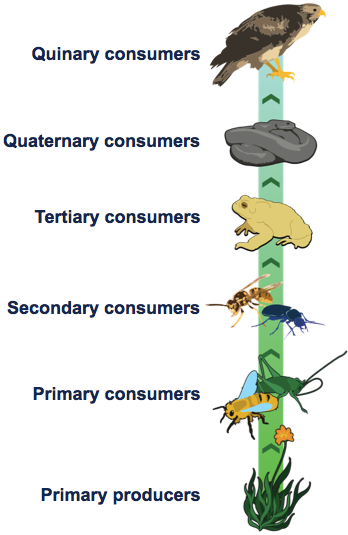 Note that some organisms may occupy one or more trophic levels in their complex relationship with their ecosystem.

Ecologists use graphics to represent a variety of relationships that exist in ecosystems. Let’s take a look at each:

A food chain is a linear model used to show a possible chain of trophic levels within an ecosystem, or simply, “who eats whom”. The matter and energy transfers from one organism to the next (producers to various consumers to decomposers). Remember that:

Look at the example food chains below. Take note that the arrows in a food chain point in the direction of energy/matter flow and not from highest trophic level down to the lowest level.

A portion of energy is lost at each link of the chain. You will read about this in the 10% Rule section below. 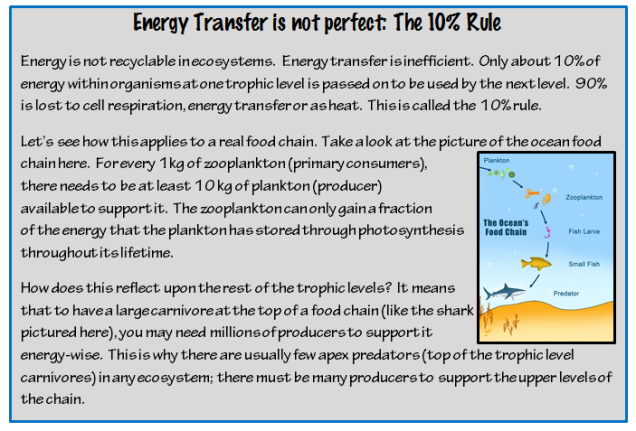 Stop and Think: The average shark weighs about 1000kg. How many kg of producers would be needed to support one shark?  (Answer: 10 million)

A food web is a model that displays all possible feeding relationships at each trophic level in an ecosystem. Examine the terrestrial and aquatic food webs shown below.   Note that food webs are made up of several food chains and always begin with producers that rely on sunlight (and rarely, inorganic chemicals). 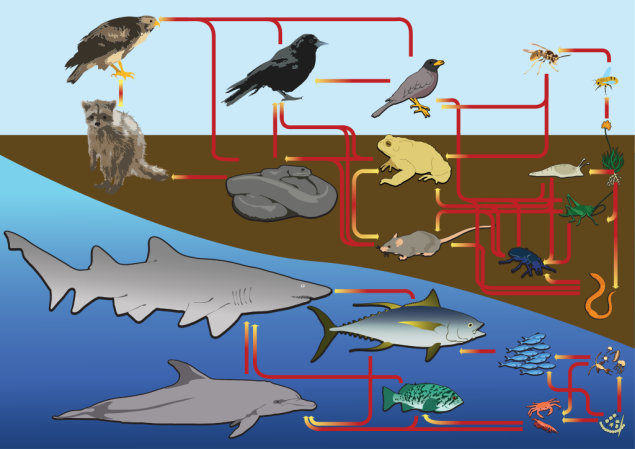 Did you notice that each pyramid typically decreases in size moving from bottom to top (it’s a pyramid, after all)? Recall that fewer and fewer organisms can be supported at higher levels of the food chain because less energy is available to them (10% rule).

A keystone species is an organism in a food web that has relatively low numbers in relation to its impact on others in the ecosystem. It is so named after the central stone,

or keystone, in an architectural arch – holding the rest of the stones in place, which would collapse without it.

Keystone species control the types and numbers of other species and help to maintain the structure of the ecosystem.They are usually a predator that prevents the overpopulation of trophic levels below them. Keystone removal – by extinction or otherwise – can have drastic effects on ecosystems. For example the sea star shown in this picture preys on mussels, shellfish and sea urchins that have no natural predators. Removing the sea star causes the mussels to overpopulate and crowd out other species, and the urchins destroy the coral reefs with overfeeding.

Some years ago, wolves were absent from Yellowstone Park. Watch this video titled “Wolves of Yellowstone” from Earth/A New Wild to study the effects of removing this top predator from the ecosystem.

Think about the following questions while watching: