What is the largest living organism on Earth? An elephant? Maybe a whale? How about a redwood tree? Actually, it is a fungus!

One honey mushroom (Armillaria solidipes) colony occupies a 2.4 mile area in the Blue Mountains of Oregon and is thought to have been growing there for about 2400 years! All of the mushrooms in this area are genetic clones of each other, whether or not they are still connected underground.

Introduction to the Kingdom Fungi

The Fungi Kingdom contains eukaryotic heterotrophs with cell walls made of chitin. It includes molds, mildews, rusts, smuts, yeasts, and mushrooms, as well as other groups. Click through the interactive to review the characteristics of the Kingdom Fungi. Record important information in your Fungi Notes Guide.

The cell wall of fungi is made of chitin, a complex polysaccharide that is also found in the exoskeleton of insects. Plants have a cell wall made of cellulose.

, which are reproductive structures that bear spores, their reproductive offspring. Often the only parts of a fungus that we see are these fruiting bodies.

Fungi are heterotrophs. Unlike members of the plant kingdom that use chlorophyll to produce their own food, fungi do not have chlorophyll and must obtain their food from other sources.

Fungi obtain food in one, or a combination, of the following ways:

Fungi break down dead plant and animal matter, obtaining nutrients. They contribute to nutrient cycling in the ecosystem in this manner.  How do decomposers eat without “mouths,” or the ability to engulf their food? Their hyphal tips release enzymes, which break down the decaying matter nearby, which they then absorb. Saprobe fungi appear on dead trees, logs, plant litter such as leaves, and even dead insects and animals.

Watch the peach on the right. It is decomposing due to the work of fungi. (Photos of the event were taken twelve hours apart over a period of six days.)

Fungi that feed on living things or use them as hosts, usually doing some degree of harm. Parasitic fungi use enzymes to break down tissues, and then absorb the nutrients. (You may not want to click on this.)

Some predatory soil dwelling fungi grow so rapidly that their hyphae can wrap around a small worm in less than a second; when the worm wiggles, the fungal enzymes weaken the body wall so that the hyphae can penetrate the worm and digest its inner tissues. 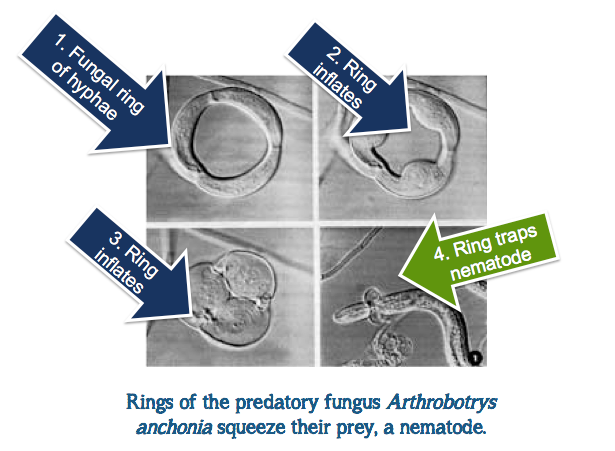 Fungi reproduce asexually by budding or by fragmentation. If the hyphae are broken (fragmentation), the pieces will grow into complete new organisms.

Some fungi, like bread mold, can release spores that are produced asexually. Spores are microscopic, non-motile cells that can develop into a new organism. Spores are produced by sporangia, which in some species form at the tips of hyphae. Spores can be dispersed by water, by wind, or by animals. When spores land in an optimal environment, the hyphae begin to grow out of the spore. Spores can be used for asexual or sexual reproduction, depending on the fungus.

Yeasts reproduce by an asexual process called budding. In this process, the yeast cell pinches itself off to produce a small offspring cell as shown in the image to the right.

Each taxon of Fungi has different, specialized structures that ultimately produce spores. You will learn about these structures in the Fungal Classification section below.

Sexually produced spores budding off of a pizza mushroom basidium.

The life cycle of a fungus begins as a spore (the reproductive body) that grows when conditions are right. Out of the spore wall grows a hypha that looks like a clear, microscopic fingertip. The body of the fungus is made up of a network of hyphal threads collectively called the mycelium. The mycelium grows in soil, within dead wood, or on living organisms. This is the part that is usually visible.

When growing conditions are favorable (moisture, food source), the mycelium develops fruiting bodies, such as mushrooms or as shelf fungi. These fruiting bodies will produce the new spores in structures called sporangia. Spores are very small and can be blown or carried by water a great distance and remain dormant until the environment is sufficiently moist.

There are 4 Divisions (or Phyla) that we will discuss in this course:

Fungi are classified according to their type of sexual reproduction.

Fungi play important roles in our lives, economically, medically and ecologically. Just a few of these roles are outlined below:

Members of the Kingdom Fungi can also cause problems. Review a few examples of these below:

Close your eyes and picture a forest somewhere in the northeastern United States. What types of trees do you see? Perhaps oak, hickory or maple trees are within your view? 100 years ago, the landscape was dominated by another tree called the American Chestnut; it was driven to extinction in less than 50 years by, of all things, a fungus.

Watch the following CreatureCast video to understand more about the American Chestnut Blight. Answer the questions that follow in the discussion forum.