Organisms in the Ecosystem: Niche vs. Habitat

Every organism in an environment has a home, or a habitat. The habitat is similar to an ” address.” It’s a description of where it survives and reproduces. A starfish habitat may be the intertidal zone on a seashore. A snake’s habitat is a grassy meadow.

As you have learned, each organism also has a specialized role to play in its ecosystem. This role is called its niche. A species’ niche is its way of life, or the part the species plays in its environment. Think of it as an organism’s “profession.” The niche includes:

There are two types of niches that exist:

Species with broad niches are called generalists. They can tolerate a range of conditions and use a variety of resources. Opossums are generalists. Species that have narrow niches, such as the koala, are called specialists.

Stop and Think: Read the following passage about the Black Racer snake, common throughout much of the U.S. Then decide how you would describe its habitat and niche. (Answer: wetlands, edge of forests, old fields)

Energy flows in one direction within ecosystems. It cannot be recycled. Matter, on the other hand, can be recycled. Nearly all of living things are composed of four elements: carbon, hydrogen, oxygen and nitrogen. This cycling of elements and chemical compounds among organisms and their environment in the biosphere is what allows life to continue on Earth.

Each of these cycles is best represented by a visual model, or diagram, that represents how that nutrient moves through living things and their environment. The cycles show close ties among all the pieces of the ecosystem and allow ecologists to make predictions about the impact of events. For example, if trees are lost due to a hurricane, there might be less transpiration. This could affect rainfall in the ecosystem.

The water cycle is the movement of water between different reservoirs (earth, atmosphere, ground). Recall that cells are about 70-90% water; water is essential to life because most of life’s processes (in the cell) occur in an aqueous environment. The availability of water within an ecosystem will determine how diverse and productive that ecosystem is.

Make sure you know the steps of the hydrologic cycle, also known as the water cycle.

Stop and Think: Where is most of the Earth’s water? Can you name the top three locations? Study the diagram shown. (Answer: oceans, then permanent ice and snow, then groundwater) 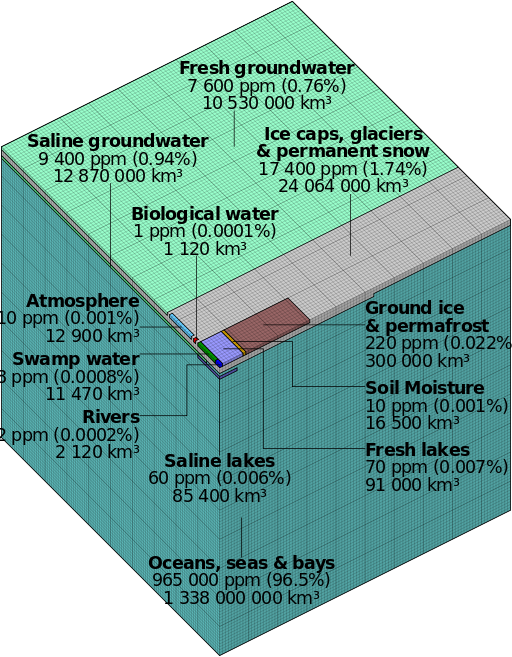 To learn about each major process in the Hydrologic Cycle, use the interactive resource. Click on each process and read details on the steps in the water cycle.

Recall that photosynthesis and cellular respiration form the basis of the carbon cycle. Carbon is found in all of the major macromolecules (carbohydrates, nucleic acids, proteins and lipids) which are necessary for all living systems.

The Earth’s atmosphere contains carbon in the form of carbon dioxide (CO2). There are five major reservoirs of carbon:

Study the cycling of carbon in the model. Read the page and click on the image to see it bigger.

All organisms need nitrogen, an important nutrient, to make proteins and nucleic acids.

The major reservoir for nitrogen is in the atmosphere (80%) as N2 gas. Most living things cannot use this nitrogen gas directly. Fortunately, there are bacteria that can transform nitrogen gas into a form that is useable.

Nitrogen-fixing bacteria (Cyanobacteria and Rhizobium) play a key role in the nitrogen cycle. Look at and read about both of these bacteria below. These organisms have unique enzymes that can break atmospheric N2 bonds and form Ammonia (NH3), a usable form of nitrogen by some organisms. 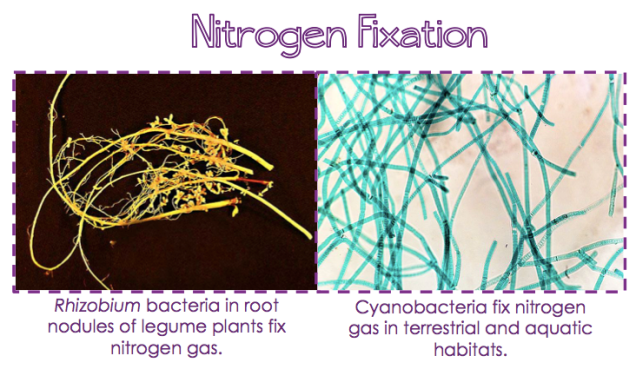 Cycling of matter among organisms and their environment in the biosphere allows for life to continue on Earth. Specific elements and chemical compounds that are recycled include carbon, nitrogen, and water.